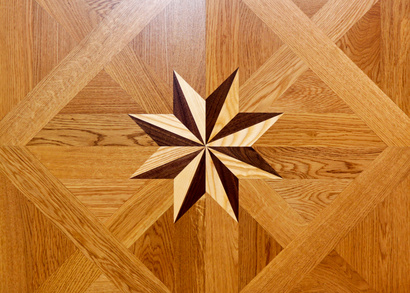 The Beauty of Marquetry and Parquetry

Nowadays, marquetry is widely used in commercial settings, bringing wood panelling and furniture to life with corporate logos and heraldry, and parquetry is popular amongst high end, artisan furniture makers. As we are asked from time to time to create wood veneered pieces incorporating these techniques, we thought we’d take a look at this interesting subject, touching on its history, uses, the differences between marquetry and parquetry and how the stunning wood artwork is created.

What are marquetry and parquetry?

The techniques are very much a labour intensive process, usually carried out by highly skilled woodworking experts. With such precision detail, any object enhanced by marquetry or parquetry will always be described as incredibly desirable and even a ‘statement piece’.

What is the difference between marquetry and parquetry?

Marquetry is all about pictures in wood, whilst parquetry involves patterns in wood.

Marquetry tends to involve beautiful artworks such as flowers, leaves, birds, animals and even entire scenes and sometimes even human portraits.

Parquetry is usually based on a recurring pattern. This is a more simplistic technique, but still extremely effective.

Parquetry is more likely to be used across larger surface areas such as wood panelling or flooring, whereas marquetry with its more intricate nature is often applied to the likes of furniture and smaller architectural features.

What is the origin of marquetry and parquetry?

Marquetry is derived from the French word marquetery, translating as ‘to variegate’. It is connected with the appearance of something enhanced by the use of different shades to create a contrast effect. Marquetry involves the use of a variety of different woods to create this contrast, and sometimes mother of pearl, ivory and bone will also play a role as the nature and value of the piece dictates.

Parquetry on the other hand uses just one or two different woods and is more reliant on the contrast of the grain rather than the colour. There are however some stunning examples of parquetry to be seen that incorporate a variety of many different woods.

Boulle marquetry is one of the most famous styles known. Named after Andre Charles Boulle, cabinetmaker to King Louis XIV of France, this method is denoted by highly intricate scrolling arabesque designs crafted in brass and tortoiseshell.

What does marquetry involve?

A range of techniques are used in the creation of marquetry. The marqueteur first chooses the woods to be used. These will be extremely thing wood veneers, almost like paper. These are ten arranged to create the desired contrast effect.

The design is traced out or stuck onto the different pieces of wood veneer, then cut. It is a very delicate process as with such thin veneers, a great deal of care must be taken.

Marquetry compositions are incredibly fragile, so they are attached to a wooden panel or a piece of furniture for stability. The composition is then varnished to protect it and also to accentuate the individual colours and really bring them out against each other.

What are marquetry and parquetry used for?

Years ago, marquetry and parquetry were used as status symbols. The more intricate the designs, intense the contrast and exotic the woods, the more the owner of the piece would be considered wealthy.

From decorative panels framed and hung like prized paintings, to incredibly striking furniture inlaid with monograms and coats of arms, marquetry has many uses. Today, corporate boardrooms may be augmented with beautifully inlaid tables bearing the organisation’s logo, or a venue’s lobby decked out with stunning wood veneer panels crafted in modern or traditional marquetry designs.

Parquetry is mostly used for flooring. It dates back to the 17th Century when King Louis XIV of France was engrossed in his Versailles palace expansion project. A wooden floor was considered far more practical and much easier to maintain than the original marble flooring at the palace, but of course simple floorboards would never have hit the mark for the flamboyant King. So marquetry techniques were used to create geometric patterns in the form of floor tiles, culminating in the famous plait-style parquet de Versailles style.

Nowadays, parquetry is widely used to create basketball courts, but it is also used alongside marquetry to create a striking backdrop for the beautiful artworks.

Whilst marquetry and parquetry are of course considered classical, high-end wood veneering techniques, today’s technologies, such as laser for example, have made them all the more accessible, and the designs, whilst still as intricate and skilled as they ever were, have evolved become more contemporary in line with modern interior décor styles.